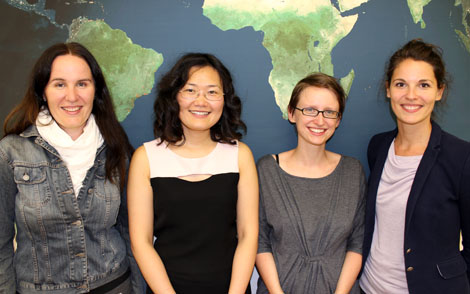 We are happy to welcome Yuwei Lin of the University of Salford, UK, to our colloquium CartoTalks.

Demystifying the relationships between women and maps

Too often, articles with headlines such as “Why women cannot read maps and men lose their keys” appear in the news. Pseudoscience or not, these instances suggest that maps are definitely socio-technical artefacts, shaped by (and also shaping) creators and consumers’ behaviours and (inter)actions, embodying certain ideologies and identities and ideologies.

In this talk, Dr Lin will draw on feminist theorising and Science and Technology Studies (STS) to exemplify how gender is explicitly or implicitly embedded in innovation and design of a technical service or a product, and to highlight the importance of improving our understandings of specific, culturally, politically, socially and materially embodied identities, epistemologies, and practices that make up technical systems.

She will also share her ongoing research on gender and free/libre open source software (FLOSS) to respond the growing interest in open source technologies and crowd sourced data in cartography. Her participatory observation and interventions at some events and online groups will demonstrate how women actively engage with free/libre open source software and how different dimensions of engagement and assemblages of social and material practices shape innovation or uses of technologies. Methodologies and social research methods will also be discussed in this part.

Overall, this talk should shed light on socio-technical dynamics and influences of crowd sourcing in an open innovation system.

This talk is organized in cooperation with Salzburg Research as part of the fem2map project. fem2map is funded by the Austrian Ministry for Transport, Innovation and Technology (BMVIT) within the structural research programme FEMtech-fFORTE.

Related to our project fem2map we held an OSM course – the photos are now online.

The 1st European State of the Map Conference of the OpenStreetMap (OSM) project took place at Vienna University of Technology from 15 to 17 July 2011.It was organized by the Research Group Cartography together with OSM Austria.

We are happy to welcome Peter Mooney of the National University of Ireland, Maynooth for a CartoTalk:

The ubiquity of location-based services (LBS) has created an exciting and rapidly evolving confluence of: GIS, web application programming, mobile cartography and user interfaces, and computer networking. As a consequence the amount of Volunteered Geographic Information (VGI) available on the Internet today has grown enormously in the past few years. Initiatives such as Wikimapia, Google Mapmaker, OpenStreetMap (OSM), geotagging in Flickr, geolocation in Twitter, Geonames, etc have seen VGI become a “hot topic in GIS research” (Mooney et al, 2010). VGI (such as OSM) has begun to to provide interesting and feasible alternatives to traditional authoritative spatial information from National Mapping Agencies and corporations. However VGI, as a spatial form of user-generated content in Web 2.0, has raised serious concerns and reservations within the GIS, Geomatics, and Cartography communities surrounding its quality, accuracy, sustainability, and fitness for use/purpose (Mooney et al, 2010). Keßler et al (2009) Compared to other projects building on user contributed content, such as Wikipedia, VGI remains on “the GIS periphery” (Keßler et al, 2009), has been restricted to web-based mapping applications (Haklay, 2010), and not considered for involvement in “serious geomatics applications” (Over et al, 2010). This talk will investigate, using OSM as a case-study, if VGI can support the geospatial data/content requirements of todays and tomorrow’s LBS.  Raper et al (2007) stress that “one key function that is rarely discussed in LBS is geospatial content management”  and subsequently classify it as an urgent research need.  Khurri and Luukkainen (2009) argue that spatial data vendors must, to gain competitive advantage in the marketplace, supply accurate, timely, and relevant content to consumers in dynamically changing environments. Through a statistical analysis of the history of user contributions to OSM databases this talk will highlight the advantages and disadvantages of VGI for LBS. Our conclusions indicate that VGI will need to introduce improved management of contributions and contributors to prevent its spatial data moving indefinitely between a status of good and bad quality. The presentation will close with some thoughts on the future for management of geospatial data and associated content for LBS.

We are happy to welcome Muki Haklay of the University College London (UCL) to our colloquium CartoTalks:

In the talk, the background to this phenomenon will be covered, pointing to the technical and societal changes that enable it. Following this overview the issue of data quality and how to evaluate it, will be discussed. Finally the behaviour of participants and their motivation will be covered.

Examples from Flickr, OpenStreetMap and Google Map Maker will be used to illustrate the various aspects of VGI and to highlight that there is a rich seam of empirical data, both quantitative and qualitative, that can be used in VGI research.