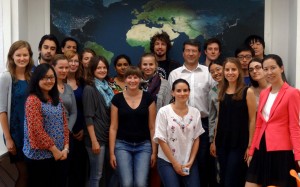 The second intake of the International Master Programme on Cartography has finished the “Vienna Semester” and is heading to TU Dresden for the third semester. We wish them all the best!

To find out more about the International Master in Cartography, please visit http://cartographymaster.eu. 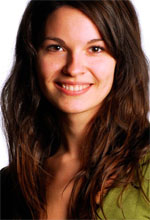 Thank you Silvia for your psychological and personal inputs to our group over the past years and all the best for your future! 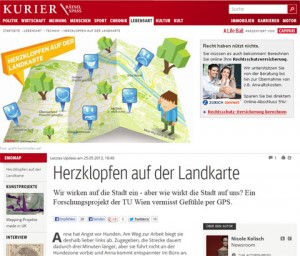 The Austrian newspaper Kurier published a report about our research project EmoMap as well as an interview with our colleague Silvia Klettner.

The Swiss National Mapping Agency (swisstopo) started production of the new 1:25’000 national map series with ArcGIS on the 1st of March this year. A short presentation will describe the history of this project and of its connection with the Topographic Landscape Model. The presentation will go on to show some of the tools developed for this project as well as the new technology being used to produce print ready PDF files. Finally a live demonstration with OSM data will show some of the tools and processes in action.

Mark Wigley studied Geographical Techniques in Luton College of Higher Education in England. After over 7 years working in the conventional cartography in both England and Switzerland he moved into desktop digital cartography at Kümmerly+Frey, the then biggest private mapping company in Switzerland. After a further 3.5 years he moved to Hallwag where he started as head of digital cartography the job of building a seamless European database using the existing paper maps. He went on, to become head of the Cartography department where he remained for over 11 years. He next moved into the software arena working 3.5 years for the Mapping Software company Morelli Informatik before finally moving to Esri Switzerland in the Autumn of 2011.

We are looking forward to your visit!

BEV – Bundesamt für Eich- und Vermessungswesen is the national mapping and cadastral agency of Austria and has a long tradition in producing maps. Nevertheless, new technologies and new user requirements lead to modern products and map production processes. The presentation will discuss the current cartographic models and map series of BEV and introduce the newest product AMap mobile. A further topic will cover the data provision for European reference datasets.Furthermore, we will have a look on present developments regarding the production processes as well as on possible products in future.

Geographic information portals where datasets, services and applications can be shared and used for development of new datasets, services and applications, open new fields of activity for cartographers. We will discuss some issues of Web maps design, a method that allows to develop semantically correct representations and some cartographic examples inspired by the geoportal – collaboration and crowdsourcing  in Lithuania: analytical maps, mapping alternative tourism sites,  mapping literature and maps for fun.

Giedrė BECONYTĖ received her PhD in Geography and MSc in System Engineering (Informatics) from the University of Vilnius. She is currently employed as Professor at the Centre for Cartography, Vilnius University and is a head of Spatial Information Infrastructure department at the State Enterprise “GIS-Centras”. She has published three textbooks on spatial project management  and DBMS. Her current research interests include innovations in thematic mapping, geographic information system design and project management. 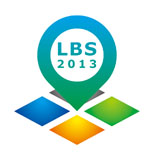 The 10th International Symposium on Location-Based Services (a conference series born at TU Vienna) will take place in Shanghai, China, 21–22 November 2013. The call for papers is open now and until 20 April 2013. 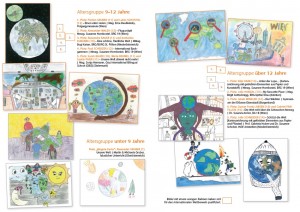 A jury selected the best entries from all the maps sent to us in the national Austrian round of the Barbara Petchenik Children’s Map Drawing Competition. Check them out here [German website]!

A selection of the winning maps will be forwarded to the international round organized by the International Cartographic Association.